The block reward for litecoin will drop by half on 5th August 2019. Many articles I have come across suggest it is a great time to jump back into litcoin since the price will resume its rally after this occurs. But will it really?

So in true spirit, Coin Market Expert has crunched the numbers and analysed the trends for you.

What is halving (or “halvening” as some prefer to call it)?

Halving (or ‘”halvening“) refers to the block reward that a cryptocurrency miner receives as an incentive by a blockchain network for every block they successfully mine.

Number of blocks in a block reward

The block reward for litecoin halves every time 840,000 blocks are successfully mined.

The number of blocks that must be mined to receive a block reward differs from one cryptocurrency to the other. For example, bitcoin block rewards halve whenever 210,000 blocks are mined.

Time to mine a block

The number of blocks it takes for bitcoin to halve is considerably less than litecoin. However, it is important to take into account the amount of time it takes to mine a block.

Litecoin and bitcoin halving expected to occur approximately every 4 years

Based on the above math, the block rewards for both litecoin and bitcoin are expected to halve every 4 years.

The following table below provides you with a useful information on litecoin and bitcoin halving dates.

The economics of halving: why is halving important?

When a block reward is halved, the amount of new coins entering circulation every day is reduced. This is because it is no longer as as profitable for a miner to continue to mine that particular cryptocurrency.

Since the level of new coin supply entering circulation decreases whilst demand for that coin in the open market remains steady (or even increases), the effect of halving is meant to be bullish on the price.

Halving serves an important purpose for extending the life of the reward system. The maximum supply limit of 21 million bitcoin would be reached much sooner if halving did not exist.

But many have attributed previous bull runs (especially in bitcoin) to the changing dynamics of supply and demand brought about through the process of halving. Is that really true?

The first halving for bitcoin occurred on 28 November 2012. On this day the block reward that miners received fell from 50 BTC to 25 BTC. As you will see from the chart below, the price of bitcoin had soared stratospherically from $12 per bitcoin to over $220 before settling down to $129.

The second halving for bitcoin occurred on 9th July 2016. On this day the block reward that miners received fell from 25 BTC to 12.5 BTC. As you will see from the chart below, the price of bitcoin had risen from $651.83 per bitcoin to just under $1,200 before settling down to $899.

The chart shows the the price of bitcoin performing much better in the run up to the second halving.

The price of bitcoin had increased 45% in six month run up to the halving on 9 July 2016. Relatively, the post price performance was not as strong in the six months following the halving event. This could imply that the market may have been more forward looking in the second halving of bitcoin and taken positions in the cryptocurrency well ahead of time – circa 3-6 months before the halving event ocurred.

The upcoming halving date for bitcoin is expected on 18th May 2020 – so you may want to make a note in your diary to start looking at bitcoin around November 2019!

So what’s going on here?

The chart below shows the price performance of litecoin in the run up to its second halving, next week, on 5th August 2019.

One can easily see the price of litecoin performing strongly, currently up 181% from where it was at the beginning of the year. Given the magnitude of the year to date performance, it would appear as though the market has already priced in a lot of the upside potential – so anyone thinking about litecoin right now ought to tread very carefully as it may already be too late. 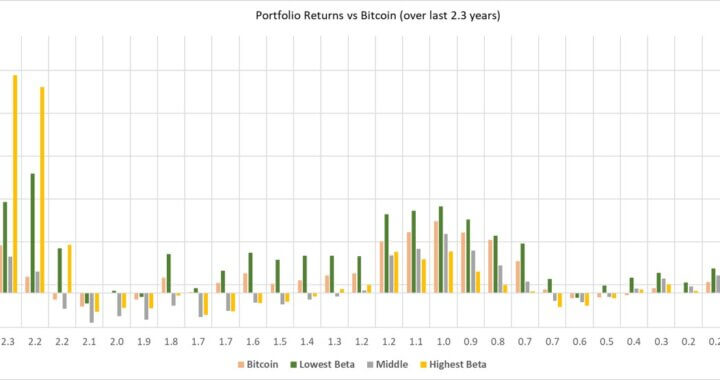